The story behind the David Bowie song 'Ashes To Ashes'

The story behind ‘Ashes To Ashes’

‘Ashes to Ashes’ is one of Bowie’s best, and popular, songs, for a variety reasons. Released in August 1980 as the first single from the Scary Monsters (And Super Creeps) album, it became Bowie’s second #1 in the UK. As well as being a brilliant song, the accompanying video, directed by Bowie and David Mallet, is also superb.

‘Ashes to Ashes’ entered the UK Singles Chart at #4 in its first week of release, rising to #1 a week later, making it Bowie’s fastest-selling single at the time. It was issued in three different sleeves, the first 100,000 copies including one of four sets of stamps, all featuring Bowie in the Pierrot outfit he wore in the video. The B-side, ‘Move On‘, was a track lifted from his previous album, Lodger (1979). The US release had ‘It’s No Game (No. 1)’ on the B-side. The single peaked at #101 in America.

Recording began at The Power Station, a multi-storied studio complex in New York during February 1980, whilst Bruce Springsteen and the E Street band were also recording on another floor of the building. Bowie arrived with the song – working title ‘People Are Turning To Gold’ – but no lyrics. These were written afterwards and recorded a couple of months later at the Good Earth Studios in London during April 1980.

With no recognised keyboard player present at the sessions, Bowie borrowed Roy Bittan from the E Street band, and he plays the Wurlitzer effect on the opening bars of the song. To achieve the desired sound, producer Tony Visconti fed the sound of a grand piano through an Eventide Instant Flanger. He later explained “We wanted a Wurlitzer but couldn’t wait for a hire company to deliver one. I tried my best to turn an ordinary piano into one, but settled with feeding it into the Eventide and setting it at maximum wobble, which everyone preferred to the Wurlitzer which never arrived.”

Visconti added, “Chuck Hammer came to our sessions with the first guitar synthesizer we’d ever seen or heard. He gave us a quick demonstration of how he would pick a note, and out of his amplifier would come a symphonic string section.”

Hammer’s contribution was recorded in the back stairwell of the studio, where it reverberated up and down four storeys. “The sound was glorious. It’s the warm string choir you hear on the part that goes, ‘I’ve never done good things, I’ve never done bad things…'”

Bowie sang his vocal during the London sessions, and keyboardist Andy Clark added the symphonic sounds at the end of the song, with Visconti playing percussion.

Lyrically the song articulates Bowie’s isolation, personal insecurity, and is laden with references to his ongoing struggle with drugs and the weight of his past career. In 1980 he said in an interview with the NME “…it’s an ode to childhood, if you like, a popular nursery rhyme … about spacemen becoming junkies!” He cited the lyric “I’ve never done good things, I’ve never done bad things, I never did anything out of the blue” as representing “a continuing, returning feeling of inadequacy over what I’ve done.” 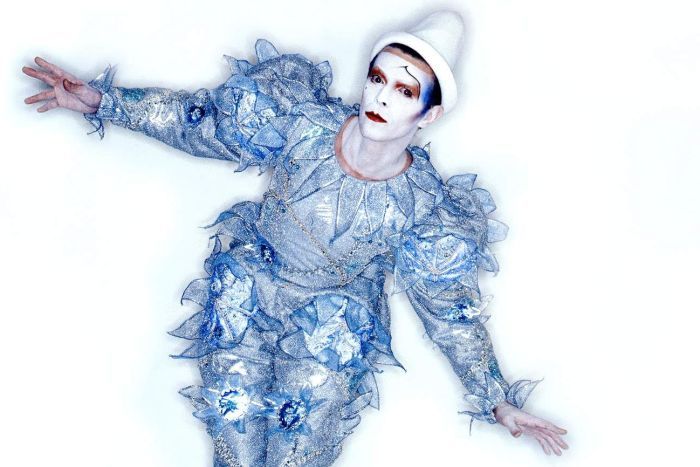 The song’s protagonist, Major Tom, first appeared more than 10 years earlier in Bowie’s first hit, ‘Space Oddity‘ – “a guy that’s been in such an early song”. Bowie explains further: “When I originally wrote about Major Tom, I was a very pragmatic and self-opinionated lad that thought he knew all about the great American dream and where it started and where it should stop. Here we had the great blast of American technological know-how shoving this guy up into space, but once he gets there he’s not quite sure why he’s there. And that’s where I left him. Now we’ve found out that he’s under some kind of realisation that the whole process that got him up there had decayed, was born out of decay; it has decayed him and he’s in the process of decaying. But he wishes to return to the nice, round womb, the earth, from whence he started.”

Bowie has admitted that the melody of ‘Ashes To Ashes’ was influenced by the Danny Kaye number ‘Inchworm’ which hails from the 1952 musical Hans Christian Anderson. “I was seven or eight when that came out. The chords were some of the first I learned on a guitar. They’re remarkable chords, very melancholic. ‘Ashes To Ashes’ is influenced by that. It’s childlike and melancholic in that children’s story way.”

The final lines, “My mother said, to get things done, you’d better not mess with Major Tom”, have been compared to the verse from a nursery rhyme: “My mother said, that I never should, play with the gypsies in the wood”.

The iconic video for ‘Ashes To Ashes’

Bowie story-boarded the promo himself, drawing it shot by shot and dictating the editing process. “I brought my drawings to David Mallet and said, look, I’d like to have a crack at this. Some of the images were kind of violent – the plough following the figures is an image of oncoming violence which I find very scary, and there’s something very religious about the other four characters in the video, an ominous quality that’s rooted quite deeply.” 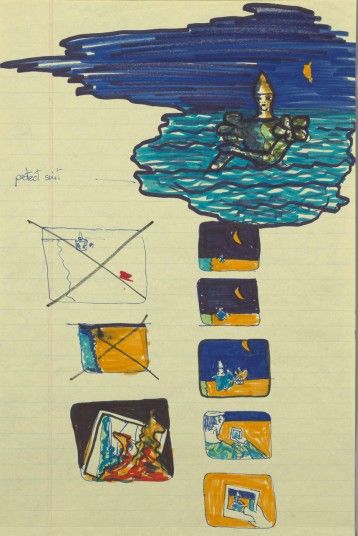 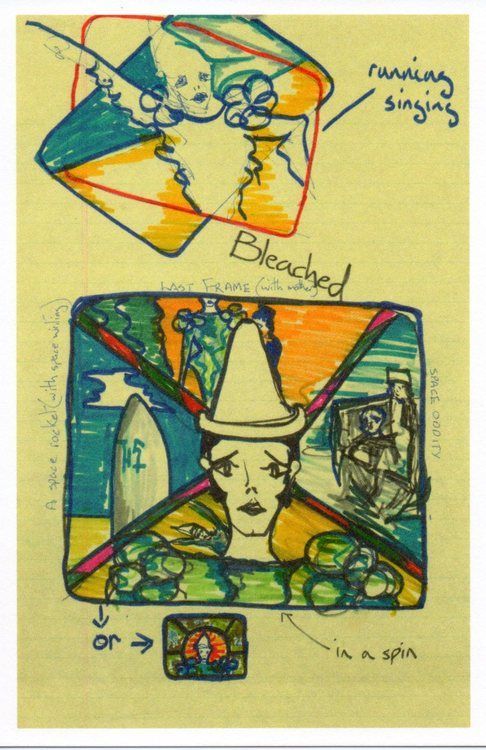 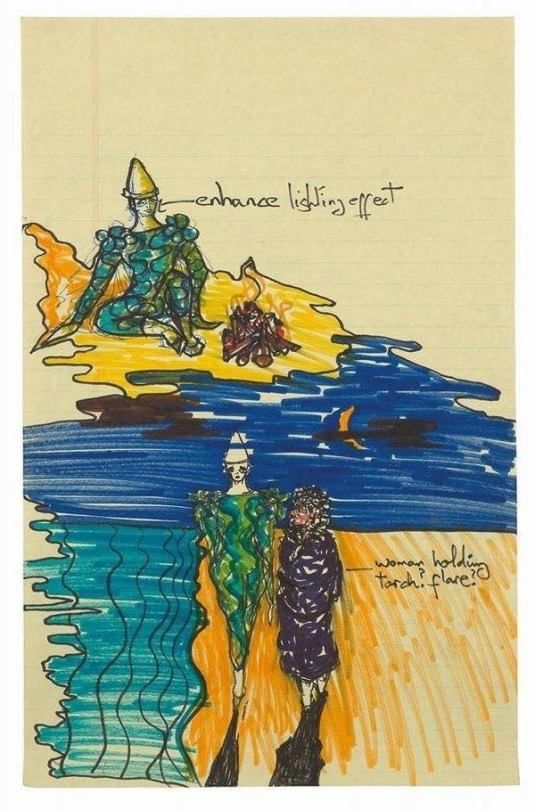 The four characters mentioned above were in fact Steve Strange and other members of the London Blitz scene, including Judith Frankland who had designed clothes for Strange’s Visage videos and Darla Jane Gilroy, forerunners of (later participants in) the New Romantic movement that was heavily influenced by Bowie’s music and image. Although it appears that two of the Blitz Kids bow at intervals, they were actually trying to pull their gowns away from the bulldozer in an effort to avoid them getting caught. Bowie then used the same gesture in the video for his next single ‘Fashion‘, and in the video for ‘Dancing In The Street’.

Scenes of the singer in a space suit—which suggested a hospital life-support system—and others showing him locked in what appeared to be a padded room, made reference to both Major Tom and to Bowie’s new, rueful interpretation of him. Contrary to popular belief, the elderly woman lecturing Bowie at the end of the clip was not his real mother. This has been interpreted by some as a reaction to the publicity surrounding Bowie’s relationship with his mother Peggy, which was highlighted in 1975 in an interview she gave to NME where she stated that Bowie never visited her. Given Bowie’s drug addition and state of mind at the time it was hardly surprising, and during the intervening years the relationship had been repaired.

“I think the recognition of the frailty of age makes one more sympathetic to earlier strains of the child-parent relationship,” he said. “It’s a shared responsibility and you get more mature about it.”

Bowie said about the video “Although it looked pretty po-faced, it was a riot making it!”

The iconic video was filmed at Pett Level, East Sussex, half way between Hastings and Rye. A bulldozer is still in action every autumn and winter there, moving shingle about (brought from Rye Harbor) to protect the sea wall defenses.

The video featured Bowie in the gaudy Pierrot costume that became the dominant visual representation of his Scary Monsters phase.

Do you remember a guy that’s been
In such an early song?
I’ve heard a rumor from Ground Control
Oh no, don’t say it’s true

They got a message from the Action Man
“I’m happy, hope you’re happy too
I’ve loved all I’ve needed, love
Sordid details following”

The shrieking of nothing is killing, just
Pictures of Jap girls in synthesis and I
Ain’t got no money and I ain’t got no hair
But I’m hoping to kick but the planet it’s glowing

Time and again I tell myself
I’ll stay clean tonight
But the little green wheels are following me
Oh no, not again
I’m stuck with a valuable friend
“I’m happy, hope you’re happy too”
One flash of light but no smoking pistol

The cover artwork of the ‘Ashes To Ashes’ single features Bowie in the Pierrot costume worn in the accompanying music video, rendered in a combination of Brian Duffy‘s photographs and paintings by Edward Bell. 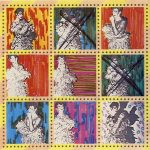 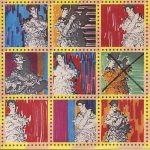 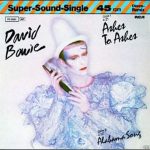 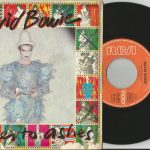 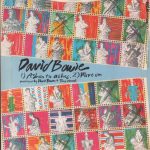 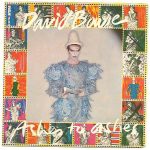 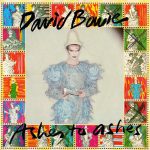 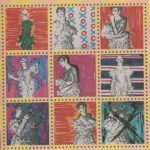