The story behind the instrumental track 'Crystal Japan', released as a single in Japan

The story behind ‘Crystal Japan’

Whilst recording the Scary Monsters album, and with the bulk of the backing tracks complete, Bowie accepted an invitation to promote a drink called Crystal Jun Rock, a brand of shochu (a Japanese distilled spirit similar to vodka) made by Takara Shuzo Co. Limited.

He would appear in two television commercials, speak four words – ‘Crystal Jun Rock Japan’ – and provide the music. The shoot took place over two weeks at a temple in one of his favourite cities, Kyoto, staying at the Osaka Teikoku Hotel.

Between shooting, Bowie spent time with Masayoshi Sukita and Yacco Takahashi in Kyoto and Tokyo. Sukita photographed him in his hotel, riding the subway, at the markets and dining with Yacco at the Tofu Chinese restaurant in Roppongi.

Before he left Japan, Bowie was asked why he had agreed to do the commercial: “There are three reasons, the first one being that no one has ever asked me to do it before. And the money is a useful thing. And the third, I think it’s very effective that my music is on television 20 times a day. I think my music isn’t for radio.”

Asked whether he wrote the music for the commercial, Bowie replied “Yes, this is the important point and the reason I agreed to do the commercial. It’s a very slow one. I didn’t use bass or drums, so it’s very different from anything I have done before. It will be included in my next album. I don’t drink while I work so I didn’t drink while I wrote this one, of course.”

The music Bowie submitted, ‘Fujimoto San’, was originally intended to close Scary Monsters until it was used for the commercial and retitled ‘Crystal Japan’ for release as a single in Japan. Takara Shuzo was initially disappointed that Bowie didn’t actually sing on the track, but the elegant commercials and print ad campaign had the desired effect, increasing demand for Crystal Jun Rock.

Recorded in 1980 during the Scary Monsters sessions (“It was just David and me,” recalled Tony Visconti, who sang the treated falsetto vocal line), ‘Crystal Japan’ is more in tune with the second side of “Heroes”, its melody reminiscent of the earlier out-take ‘Abdulmajid’. Dropped from Scary Monsters (it would apparently have ended the album before Bowie opted to reprise ‘It’s No Game’ instead), it was released as a single in Japan only, before appearing in other territories as the B-side of ‘Up The Hill Backwards’ in March 1981. ‘Teenage Wildlife’ was originally slated as the B-side, until Bowie found out the prices fans were paying for the import single of ‘Crystal Japan’ and insisted the track got a UK release.

The melody of ‘Crystal Japan’ was later incorporated into ‘A Warm Place’, an instrumental on Nine Inch Nails’ heavily Bowie-influenced 1994 album The Downward Spiral. Although the band’s frontman Trent Reznor later acknowledged the close similarity between the two tracks, he maintained that it was unintentional.

The footage from the 1980 Japanese TV commercials for Crystal Jun Rock have been combined by Nacho to produce this belated promo video for the track:

One of the original TV adverts: 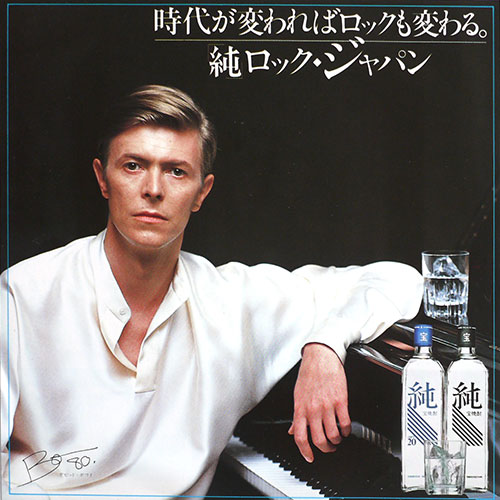