The story behind ‘Let’s Dance’

Let’s Dance was David Bowie’s first global hit record, introducing him to a new, younger audience, and catapulting him to an altogether new level of stardom. The first song to be recorded during the Let’s Dance album sessions, the song had far humbler beginnings.

“Frankly, the song ‘Let’s Dance’ didn’t start out to be anything more than just another track on the album,” admitted Bowie later. “It was Nile Rodgers who took it and structured it in such a way that it had incredible commercial appeal.”

During an interview with BBC Radio 2’s Golden Years, Nile Rodgers said that when Bowie first played him the song on acoustic guitar it was “very reminiscent of a folky kind of song … I thought it was really bizarre, but he was convinced it could be a hit, and I just kept working on it.” One of Rodger’s embellishments was the addition of the rising vocal intro, shamelessly stolen from The Beatles’ famous opening to ‘Twist And Shout’, while the funky bassline was pure Chic. Rodger’s has also suggested that “everybody is gonna think that I wrote ‘Let’s Dance because it has that Chic feel with Bernard [Edwards] playing a real walking bass – the bassline is, in fact, very much like the one in ‘Good Times’.”

Another similarity is the breakdown which can be heard on the 12″  and album versions, in which the instruments cutout one-by-one, leaving just the bass and the drums before building back  to the full arrangement. “On a song like Chic’s ‘Good Times’, the most important part was the breakdown,” Rodgers explained. “Whenever the band would go to the breakdown the audience would scream.”

The track also features a blistering guitar solo by Stevie Ray Vaughan. Bowie and Vaughan originally met at the Montreux Jazz Festival in 1982, when music industry legend Jerry Wexler, familiar with Stevie Ray Vaughan and his band Double Trouble, had suggested to the organiser of the festival that Vaughan would be a stellar act for the festival’s blues night. Wexler referred to Vaughan as, “a jewel, one of those rarities who comes along once in a lifetime.” So Double Trouble were booked for the festival, appearing on 17 July 1982. Despite playing an explosive set, there were scattered boos throughout the crowd. Vaughan, who was at this point unsigned and virtually unknown outside of Texas, was upset by the audience’s negative reception. But all was not lost, as David Bowie had caught the set, and was thoroughly amazed by what he had seen and heard. He called Vaughan the best guitarist since he had seen Jeff Beck play the blues back in the 1960s. Though Vaughan wasn’t overly familiar with Bowie’s work, the two musicians chatted in depth about music and especially about Texas blues and its roots. Vaughan was sufficiently impressed by Bowie’s level of interest in the music. The two struck a chord and Vaughan was soon brought on board to record guitar parts for Bowie’s 15th studio album, Let’s Dance.

Vaughan has commented on the recording sessions, saying, “David Bowie is real easy to work with. He knows what he’s doing in the studio and he doesn’t mess around. He comes right in and goes to work. Most of the time, David did the vocals and then I played my parts. A lot of the time, he just wanted me to cut loose. He’d give his opinion on the stuff he liked and the stuff that needed work. Almost everything was cut in one or two takes. I think there was only one thing that needed three takes.”

After the recording of the album, Stevie Ray Vaughan was due to play on the Serious Moonlight tour, however he was dismissed with less than a week to go and was replaced at the eleventh hour by Earl Slick. But Vaughan’s career was on a new trajectory now. By the time Let’s Dance was released, Stevie Ray Vaughan and Double Trouble had a record deal with Epic, and he would go on to become the biggest blues star of the 1980’s and one of the era’s greatest guitar heroes.

The video for ‘Let’s Dance’

The music video for ‘Let’s Dance’ was shot in February 1983 by David Mallet on location in Australia including a bar in Carinda in New South Wales and the Warrumbungle National Park near Coonabarabran.

At the beginning it features Bowie with a double bass player inside the one-room pub at the Carinda Hotel and an Aboriginal couple ‘naturally’ dancing “to the song they’re playin’ on the radio”. The couple are played by Terry Roberts and Joelene King, who were students at Sydney’s Aboriginal-Islanders Dance Theatre. Some residents of the 194 residents of the village of Carinda are in the pub too, watching and mocking the couple.

By taking a lateral spin on the song’s lyrics to espouse the cause of Aboriginal rights, the video offers the first substantial evidence of the socio-political role that Bowie began carving for himself during the 1980s.

“As much as I love this country,” he told Rolling Stone during the shoot, “it’s probably one of the most racially intolerant in the world, well in line with South Africa … There’s a lot of injustice, so let’s, you know, say something about it.”

However the message in the ‘Let’s Dance’ video is oblique, relying on a series of metaphors to dig deep into the Australian psyche.

“One thing Id been toying around with was the repellent qualities of the other side of the world, be it the Middle East or the Far East,” Bowie said, “How we”re both both drawn and repulsed by what happens and who they are, and the fact that we’re all one. That basic idea came through on ‘Let’s Dance’ with the Aborigines and colonial English, and then in ‘China Girl‘ and finally in ‘Loving The Alien‘.”

“The red shoes are a found symbol. They are the simplicity of the capitalist society and sort of striving for success – black music is all about ‘Put on your red shoes'”, as Bowie later confirmed.

By choosing a symbol of capitalism which simultaneously references his beloved black music, maybe Bowie is confessing his own collusion in the process of cultural imperialism; for example when he appears as the icy corporate manager.

If you say run, I’ll run with you
If you say hide, we’ll hide
Because my love for you
Would break my heart in two
If you should fall, into my arms
And tremble like a flower
(Let’s Dance)

And if you say run, I’ll run with you
And if you say hide, we’ll hide
Because my love for you
Would break my heart in two
If you should fall, into my arms
And tremble like a flower

(Let’s Dance) Put on your red shoes and dance the blues
(Let’s Sway) Under the moonlight, this serious moonlight 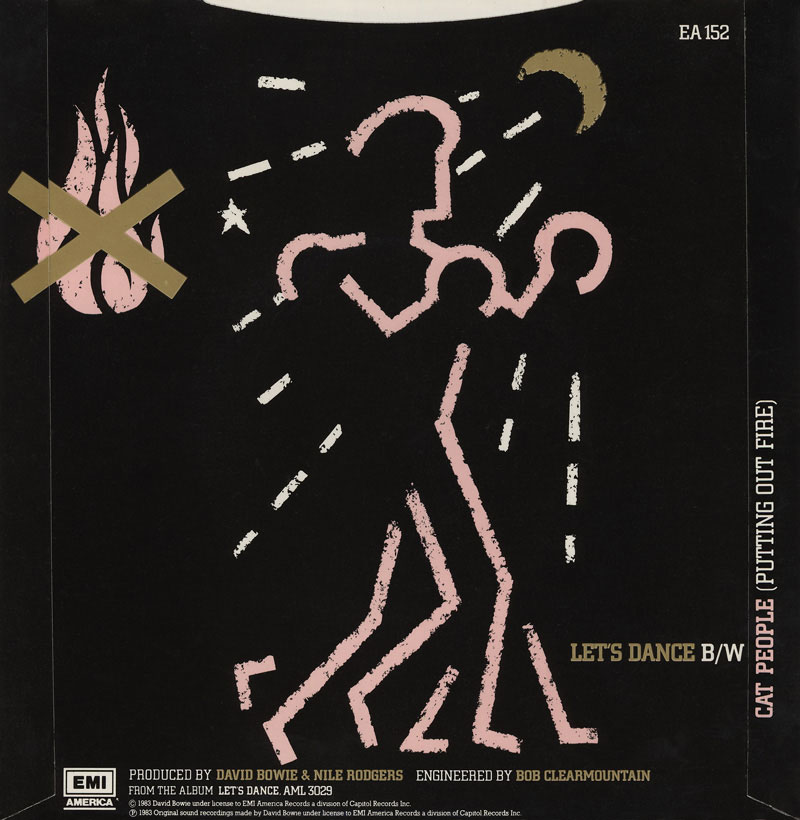