When Bowie met Warhol, as told by Tony Zanetta

In the early 1970’s, New York actor Tony Zanetta performed in underground theater in plays by Andy Warhol, Jackie Curtis and Wayne/Jayne County. His portrayal of Warhol in the play Pork would have him meet David Bowie in London. When Bowie visited New York in 1971, Zanetta guided him through the town’s nightlife. He soon became part of Bowie’s inner circle as tour manager of the Ziggy Stardust and Diamond Dogs tours and helped run Bowie’s MainMan management organisation. Zanetta had not seen Bowie in over 40 years when he learned of his death. Below, Zanetta recalls the exciting time when Bowie arrived in New York an unknown who would soon become a superstar.

“I met David in London in 1971. I was working in downtown theatre and I got involved in Andy Warhol’s play called Pork. Andy Warhol “wrote” a play. Pork was based on tape-recorded conversations between Andy and the Superstars. Pork was done at La MaMa in New York and then a producer picked it up and brought it to London. We were in London for the whole summer at the Roundhouse Theatre.

I was Andy in the play. The play was pretty much a sensation in London that summer and David was a big Warhol fan. And a big fan of the Velvet Underground. So he really wanted to meet Andy but he met me instead [laughs].

He came to the play a couple of times. He and I and his wife Angie became fast friends. This is the summer of 1971 and during that summer his manager Tony DeFries was also working on getting him a new record deal. 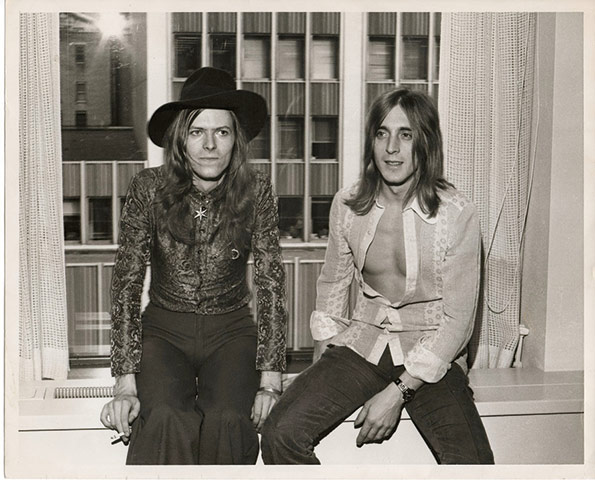 The play ended in the end of August. I came back to New York and the manager and David and Angie and Mick Ronson came to New York that September to sign with RCA Records. I hung out with them the whole week they were there, showed them around New York, got them to The Factory to introduce David to Andy Warhol.

We all marched over to The Factory. The meeting was kind of tense because Warhol was not a great talker, you had to talk and entertain Andy, and David really wasn’t a great talker either. Nobody was really taking this conversation and running with it. So they were circling each other and then David gave him a copy of Hunky Dory on which was his ode to Andy Warhol, the song Andy Warhol.

We probably played it, I can’t remember. Warhol didn’t say anything but absolutely hated it. Which didn’t help the meeting. Remember, David Bowie was not a big star. He was just some guy off the street as far as Andy Warhol was concerned. They found a common ground in David’s shoes. David was wearing yellow Mary Janes and Andy had been a shoe illustrator, which David knew so they began talking about shoes. Otherwise it was not the greatest meeting [laughs].

He also met Lou Reed that week and Iggy Pop that week. So it was a big, big, big week. And it was the beginning of the whole next phase of his life and career and as it turns out all of our lives and careers. So I ended up working for him and his manager for the next few years.

The record company, when they signed him, arranged for a dinner at a restaurant called The Ginger Man. They invited Lou and David and Mick, me and DeFries. So that was the first time Lou and David actually met, at that dinner.

And they, I think, got along pretty well. Lou was the really smart-alecky, sarcastic New York guy. But I think he and David were pretty cautious of each other. It was almost like the beginning of a romance. They were kind of sizing each other up. Lou was on his best behavior with David and then after dinner we went to Max’s Kansas City.

Lou didn’t come but we got to Max’s and I think we sat with [manager] Danny Fields. Iggy [Pop] was in New York and he was staying with Danny. David had done a promotional tour for Mercury Records a year before and I think some A&R guy turned him on to Iggy. So Iggy became his big obsession.

Iggy was in Danny’s apartment and he called Iggy to come over to meet David. And he did [laughs]. Iggy at the time was between record deals, he was getting off heroin, he was on methadone and living with his parents in Michigan. So he was wide-eyed for any opportunity and he knew the whole score with David. They got along immediately.

What were those nights like? They were just like anybody’s nights. They’re so legendary but they were like … just nights. Max’s is very legendary but you basically sat around with a bunch of people talking. David certainly wasn’t shy but David was kind of laid back and quiet. He wasn’t the kind of guy that went into a club and said, “Look at me, look at me, look at me.” He wasn’t rowdy or raucous. He wasn’t even flamboyant – even though he was, but he wasn’t. He didn’t draw attention to himself. David was more taking it all in and always studying everybody. He wasn’t an attention-seeking guy in the way a lot of really extroverted people are. Sitting at Max’s, it was just sort of low-key conversation.

The talk would be about ambition [laughs], stardom, music, what they were going to do, all that kind of stuff. David was very wide-eyed about his future and he definitely had his eye on the ball.

He didn’t go to a lot of clubs at that point in 1971. He went to Max’s. Later, in 1972, I took him to the Mercer Arts Center to see the Dolls where he met David Johansen and they got along pretty well. And then Cyrinda [Foxe], who was going out with David Johansen at the time, suddenly started hanging around David at the Plaza and then came on tour with us [laughs]. She left David Johansen for a while to hang around with David. When he came back to New York in the spring of ’74 to prepare for the Diamond Dogs tour was when he started hanging around mostly the uptown clubs. His girlfriend was Ava Cherry, she was a beautiful black girl. She took him to Spanish Harlem, she took him to Harlem. He liked the Apollo. That was before he recorded Young Americans. He was fascinated by all that music, he was fascinated by the black entertainers. There was all this confusion. Was he bisexual, was he gay? David certainly was bisexual but – he was English. We Americans look at sex a little differently. For him and Angie, sex at the end of the night was kind of like shaking hands or a goodnight kiss, it wasn’t a big deal. And it also wasn’t a big deal whether who was in your bed was male or she-male [laughs]. He was certainly primarily heterosexual but it didn’t matter that much. I’m sure a lot of the girls that ended up in his bed were not the prettiest ones. He was focused on his work. He was very sexual but it wasn’t a big deal.

What he meant when he said he was gay – he loved the gay clubs, he liked the gay sub-culture. He did have some gay friends. Did he sleep with guys exclusively? Certainly not. If he slept with guys, it was ten girls to one guy. [laughs].”

As told to Frank Mastropolo.